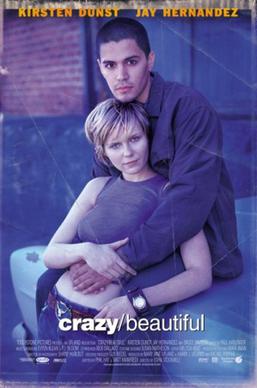 My favourite quote – “There are millions of people in this world, but in the end it all comes down to one. I still panic sometimes, forget to breathe, but I know that there’s something beautiful in my imperfections; the beauty that he held up for me to see. The strength that I will never be able to say.”

True love. The one. Do you believe in that? True love and the elusive “one”? I haven’t found him yet I guess or he hasn’t found me, whichever. I have watched this film so many times but still I tear up and get very emotional when I watch it. I like what Kirsten Dunst’s character says at the end of the film. Its my favourite because its something I believe in too, that while “there are millions of people in this world, but in the end it all comes down to one.”

I also think that the right person for you will compliment you and make you a better person, which is what happens in crazy/beautiful. I guess that is why they say opposites attract isn’t it? Nicole, played wonderfully by Kirsten Dunst, has her imperfections and is often seen as unruly and trouble, but all it took is Jay Hernandez’s Carlos Nuñez who loves her despite her craziness and sees the beauty in her. Nicole is so out of control, while Carlos is so straight laced and in control forgetting to have fun and live a little.

crazy/beautiful is a very straightforward predictable film. But why do I enjoy it so? Probably because I am a sucker for romance and anything to do with love conquering it all. We have two vastly different individuals who find one another unexpectedly. Their differences and initial incompatibility is stark and very obvious. And yet the film slowly draws you into their differences and their romance because it is a Romeo and Juliet type story. And we always want to see Romeo end up with Juliet and have a happily ever after. And thankfully in this film they do. Their journey is arduous and not very surprising, but it is moving nonetheless.

The way the film is shot makes it feel very real. Like it were a documentary on young love and the difficulty of a father coping with a daughter he doesn’t know how to communicate with or know how to show his love for her. I especially love that at the end of the film, father and daughter finally open a door of communication with each other and try to work on the relationship. Sometimes, all you need to do is to talk things through, properly. But of course, you must first want to make things work out. Its a two way communication, both parties must want to make it work.

Nicole says to her father “I know I not easy to love, but could you try anyway” near the end of the film and it hits me finally, that besides being about romantic love, its also about a father’s love and mother’s love too. Despite being a handful, Nicole’s father never stopped loving her. And Carlos’ mother works so hard to give him a good education because she loves him and wants the best for him.

“You can be anywhere where when your life begins. You meet the right person and anything is possible.”
– Nicole Oakley

“You can be anywhere when your life begins. When the future opens up in front of you. And you may not even realize it at first, but it’s already happening.”
– Nicole Oakley

A friend once told me that maybe she still can’t find her true love because it isn’t meant to be. That because she is blessed and so loved by her parents and her good friends that true love will be the one thing that eludes her. Maybe that is true. But maybe she just hasn’t met the right person. But one thing I do know is that even if I can’t find this true love, my parents, family members, and good friends will love me no matter what. And at the moment, I will hold on to that. Life goes on with or without a man by my side. I can be anyway when my life begins, but first I have to make sure I am living my life and not wasting it away.

crazy/beautiful makes you want to keep believing that you will one day meet someone who will accept you and all your weirdness and craziness and make you a better person. Are you convinced? I am. It keeps the hope in me alive. The hope that I will find myself a Carlos Nuñez. But in the meantime, I will remember that there is something beautiful in my imperfections and to keep breathing and not to panic even if I don’t ever meet him. You might be crazy in the eyes of others, but you’re beautiful in your own way. Never forget that. And anyway, my parents will love me no matter what. I just need to remember to be thankful for that and love them them back. (4 of 5)