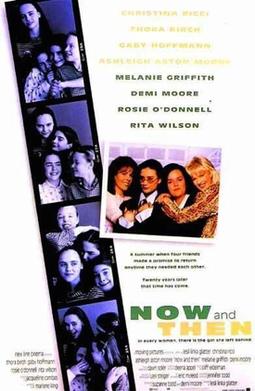 My favourite quote – “Things will happen in your life that you can’t stop. But that’s no reason to shut out the world. There’s a purpose for the good and for the bad.”

I really like Now And Then, it reminds me of my younger day. Well, they are films that I first watched when I was just a child. If you liked My Girl and The Baby-Sitters Club, both films from the 90s, you’ll enjoy Now And Then as well.

Shelby, Indiana was not the most exciting place to grow up. In fact, the most common cause of death before puberty, was boredom. And in the days before MTV and Nintendo, we had to find ways to entertain ourselves.
– Adult Samantha

Do you remember your childhood days? It’s the first day of the new year and with so much time on my hands, I find myself thinking about how I got to now. My jiemeis and I haven’t counted down to the new year together in quite a while. And although we no longer have much stamina and struggled to stay away, it was still fun, to get together, drink some wine, catch up, and reminisce a bit.

Now And Then is a film about 4 friends who grew up and grew apart. But most of the film is set in 1970 when the summer that changed everything for them. I am a 80s kid. So I could appreciate the nostalgia of the film.

I remember days when having a Nintendo made you cool and hip. I also remember the days when email didn’t exist, mobile phones were yet to be created and when we wanted to communicate with one another while on the move, we sent numeric codes like ‘1314’ (一生一世) and ‘521’ (我爱你) to our pagers.

Boy do I feel old. But now, when I look around, more kids are playing with their iPads and smart phones instead of playing outdoors. I myself rely too much on my electronics.

So it makes me a little sad. That growing up now is so different from growing up in the past.

The Good And The Bad

One of the reasons why I really enjoyed this film is because of this scene. Yes, its cliché but I do think that “there’s a purpose for the good and for the bad”. And while I may not understand it now, I believe that one day I will figure out the purpose of the good and the bad things that happened earlier in my life. I’ve subscribed to this way of thinking for quite a while now.

So if 2015 was a bad year for you. Put it aside for now and in the future, you might one day figure out why the way things happened the way they did.

The adults sit around, reminisce and play truth or dare in their treehouse. And the repetitive question is ‘Are you happy?’. What a simple yet tough question to answer. I think I’m happy, but I’m not happy about everything that’s happening in my life right now. But I think that once I figure out what to do next, I’ll be happier.

That will be my goal for the year –  to make sure I’m happy. It’s a tall order, but a good goal to strive towards. Don’t you think?

One of the things that make me happy is catching up with my friends and hanging out with them. And I adore the friendship these four women in the film have. I’m so glad to have friends who stand by me during tough times.

In The Baby-Sitter’s Club, another 90s film I like, the lead actress looks back at her summer and narrates this, “Mom says if you can count the number of friends on one hand, that’s a lot. Well I’ve got five fingers and more than five friends. Mom says I’m way ahead. I think she’s right.”

Well, I’ve got ten fingers and more than 10 good friends. I think I’m way, way ahead.

Past, Present, And Future

You can run from the disappointments you’re trying to forgot. But it’s only when you embrace your past that you truly move forward.
– Adult Samantha

Some people say that we should stop looking at the past and look to the future instead. While I agree that one shouldn’t remain in the past, I feel that it doesn’t hurt to reflect on the past and accept all that’s happen so that you can “truly move forward” without any excess baggage. After all, your past is what shapes who you are today.

I think the adults cast in Now And Then were perfect. I thoroughly enjoyed watching Demi Moore all flustered when Rita Wilson’s Chrissy was about to give birth. Melanie Griffith captured my heart the moment she stepped out of the limo and the first thing she said was “Hey Bitches”. And Rita Wilson was awesome in the scene when her character was in labour. I was tickled by Janeane Garofalo’s portrayal of the creepy town “witch” but baffled by the insertion of Brendan Fraser’s veteran solider. I laughed so hard when Bonnie Hunt, who I loved in Jumanji, tried to explain the birds and the bees to young Chrissy.

The kids cast in the film had a lot of responsibility. They had to make the audience feel for the adult characters so that when we see them again at the end of the film, we’d understand all that’s happened and can appreciate that final scene in the treehouse.

Of the four young girls, my favourite is Christina Ricci. She has a tough back story to portray and she played it well. I thought Ashleigh Aston Moore did very well as the prim and proper too-innocent and whiny Chrissy. Thora Birch didn’t have much to work with but held her own as teenage Teeny. Although Gaby Hoffmann wasn’t terrible as the young Samantha, I think the other girls did a better job in their respective roles. I even enjoyed watching Devon Sawa in the small role of Scott.

It was a good light-hearted film to catch as the first day of the year comes to an end.

(3) Rosie O’Donnell has acted in films like Sleepless In Seattle (1993) and The Flintstones (1994). She also acted in television series like The Nanny, Ally McBeal, Will & Grace, Nip/Tuck, and Smash.

(12) Devon Sawa has acted in films like Little Giants (1994), Casper (1995), and Final Destination (2000). He played the role of Owen Elliot and Sam Matthews in Nikita and also guest starred in television series NCIS: Los Angeles.

Now And Then is a feel-good movie that was quite well done. All in all, I enjoyed it and would watch it over and over again. After a decent amount of time has passed of course. I especially loved the good old classic tunes used in the soundtrack of the film. If you’re born in the 70s or 80s and need a little nostalgia, this is a good film to pick up at the DVD rental shops. (3.5 of 5)