How do enemies become friends and learn to work together? Well, throw them millions of light years away from home and force them together of course! 2 crews have to work as 1 and it isn’t all smooth sailing of course. After the pilot, breaking the ice is the next step in the series and episode 3 touches on that subject.

In this episode, we also get to know the Doctor and B’Elanna Torres a little better. After all, in the previous episode, all we saw was that the Doctor is abrasive and doesn’t have a great bedside manner. The kind of tough love he dishes out reminds me of how Leonard McCoy aka Bones treated James T Kirk in the 2009 Star Trek film.

B’Elanna’s anger management issues will be an ongoing problem for her. It’s something she will work on throughout the 7 seasons. But even in this one episode, we see her gradually calm down and see reason despite her anger issues.

One thing it does remind me is that one should always think before one acts or speaks. Words can hurt as much as actions, sometimes even more.

Chakotay: You might be interested to know that the impact fractures along his cranium were pretty severe. If you’d hit him just a little harder you could have driven some of those bones into his cerebellum.
B’Elanna: I didn’t even come close to hitting him that hard.
Chakotay: So on the one side I’m facing a Vulcan who wants to court marshall you. And on the other, I’m facing all the Marquis who are ready to seize this ship over this. You’ve turned this into one lousy day for me Torres.
B’Elanna: So how long do I have to stay in here?
Chakotay: Rest of the trip. 75 years.
B’Elanna: I’ve never found your twisted sense of humour very funny Chakotay.
Chakotay: Or I could send you back to work with the understanding that you’ll apologise to Mr…
B’Elanna: Apologise!? He was the one who…
Chakotay: Not just a simple apology, a personal one. Over a hot cup of perjuta. Bond with the man.
B’Elanna: I am not gonna bond with him.
Chakotay: You’re gonna need support from people like Carey.
B’Elanna: I don’t need support from anybody.
Chakotay: You are if you’re gonna be Chief Engineer of this ship.
B’Elanna: Ha! Right.
Chakotay: This is not another example of my twisted sense of humour.
B’Elanna: But Carey’s next in line.
Chakotay: You’re a better engineer than he is.
B’Elanna: What does the captain have to say about this?
Chakotay: She hasn’t said a word. Because I haven’t told her yet. 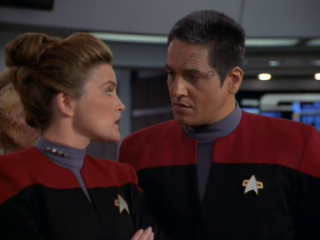 This “power struggle” between Chakotay and Captain Janeway is interesting. After getting to know them individually and seeing them work together, I find myself rooting for the 2 to get together, if you know what I mean. This of all the great working relationships on screen like Lois & Clark, Mulder & Scully etc. Over time, I find that theirs is a pairing I wish could come true.


The Doctor also is a character that undergoes much growth throughout the 7 seasons and this episode raises some of the things that he is affected by. The way he is treated is a matter that comes up a lot, his choosing a name is also an ongoing personal project of his, and there is the matter of his bedside manner. But the scene between Kes and the doctor brings to light a budding relationship that was not established in episode 1 and 2.

Kes: Computer, activate the Emergency Medical Holographic System.
Doctor: Please state the nature of the medical emergency.
Kes: Actually there is no emergency. I’m creating a hydroponics bay. I was told you could provide me with some nitrogenated soil samples.
Doctor: That’s it?
Kes: I’m sorry if…
Doctor: So it begins. The trivia of medicine is my domain now. Every runny nose, stubbed toe, pimple on the cheek becomes my responsibility.
Kes: You are the only doctor we have.
Doctor: I’m not just a doctor. I’ve been designed with the information from 2000 medical reference sources and the experience of 47 individual medical officers. I am the embodiment of modern medicine. How much dirt do you need?
Kes: 4 samples will be enough.

Kes: I’m sorry I bothered you with this.
Doctor: No trouble at all, just turn off the program before you leave.
Kes: What’s your name?
Doctor: What purpose would a name serve a hologram?
Kes: I’d just like to know what to call you besides doctor.
Doctor: I guess they never thought I’d be around long enough to need one. What’s your name?
Kes: Kes.
Doctor: Kes. I’m glad I could help you today.
Kes: Computer end program.

Besides her temper, B’Elanna’s other character flaw is her lack of confidence in herself and her abilities. And I think it’s fascinating to see how she lashes out and tries to appear strong when really she has a sensitive and soft side she hides from everyone else. I really like the exchange between Captain Janeway and B’Elanna and how Captain Janeway takes into consideration Chakotay’s suggestion despite her apprehension and doubts. It shows her depth of character and maturity and makes me understand how she could come to be a Starfleet captain.

B’Elanna: Captain I want to apologise for losing my temper in your ready room. I think maybe you were hitting a little bit too close to home. You know. I respect Chakotay. But he’s wrong, I’m not officer material and we both know it. The truth is I quit the Academy because I realised I couldn’t make it in Starfleet. And believe me no one was sorry to see me go.
Captain Janeway: Professor Chapman was.
B’Elanna: What?
Captain Janeway: He put a letter in your permanent file saying that should you ever reapply he would support you. He thought you were one of the most promising cadets he’d ever taught.
B’Elanna: I fought with him almost every day. I was always questioning his… his methods, his assumptions, and he was always slapping me down like some upstart kid. I was surprised he didn’t help me pack my bags.
Captain Janeway: Some professors like students who challenge their assumptions B’Elanna. And so do some captains. Professor Chapman wasn’t alone. Many of your teachers thought you had the potential to be an outstanding officer. You had more friends at the Academy then you realised.

“In command school, they taught us to always remember that maneuvering a starship is a very delicate process, but over the years, I’ve learned that sometimes you just have to punch your way through. Mr Paris, full impulse power.”
– Captain Janeway

My favourite lines – “Engine efficiency is down another 14%. If we don’t get more power to the warp drive, we’re all gonna have to get out and push.”, “Feels like real ship to me. Let’s get back to the bridge.”, & “We’re almost to the rupture. Mr Paris is about to impress us with his piloting skills.”


(1) Kate Mulgrew has acted in films like Star Trek Nemesis (2002) and The Best And The Brightest (2010). She also guest starred in television shows like Cheers, Murder, She Wrote, Law & Order: Special Victims Unit, and Warehouse 13.

(3) Tim Russ has acted in films like Spaceballs (1987), Star Trek Generations (1994), and Live Free And Die Hard (2010). He also played the character of Frank in the television series Samantha Who? (2007-2009) and guest starred in shows like The Fresh Prince Of Bel-Air, Star Trek: The Next Generation, seaQuest DSV, Star Trek: Deep Space Nine, ER, NCIS, Without A Trace, Hannah Montana, iCarly, The Secret Life Of The American Teenager, and CSI: Miami.

(4) Robert Duncan McNeill also acted in the film Masters Of The Universe (1987) and has guest starred in television shows like Quantum Leap and Murder, She Wrote. He has also directed episodes of various television shows like Star Trek Enterprise, Dead Like Me, One Tree Hill, The O.C, Las Vegas, Medium, Supernatural, Desperate Housewives, Samantha Who?, and Chuck.

(5) Roxann Dawson has guest starred in television shows like Baywatch, Without A Trace, and Closer. She also directed episodes of television shows like Charmed, Star Trek Enterprise, Lost, The O.C., Crossing Jordan, Cold Case, Hawthorne, Melrose Place, Heroes, Lie To Me, The Closer, The Mentalist, The Good Wife, Smash, Scandal, Touch, and Vegas.

(7) Ethan Phillips has acted in films like Bad Santa (2003) and The Island (2005). He also guest starred in television shows like Star Trek: The Next Generation, Star Trek: Enterprise, and Bones.

(8) Martha Hackett acted in the film Never Been Kissed (1999) and has guest starred in television shows like Star Trek: Deep Space Nine and NCIS.

* Poster from Amazon.com & screen grabs from the show