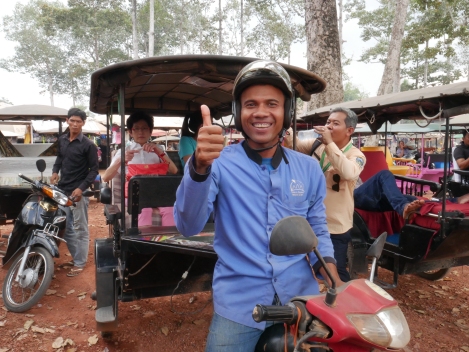 5 days into the new year I set off to Siem Reap, Cambodia. I wasn’t sure if I was going to enjoy my time there as I received some very bad news just before the start of 2016. Without any context, this post would not make any sense, so here’s the story. A time line of the events so far.

December 29: Due to restructuring in the company, my position was made redundant and I was asked to leave the company.

January 5: I was off to Cambodia for a 6 day trip.

January 12: I’m back in sunny Singapore thinking about how 2016 has been for me so far.

This trip to Cambodia was a last-minute decision and very quickly put together. But my being asked to leave was even more sudden. While my scorpio-senses gave me an inkling of what was to come, the speed at which it happened was astounding.

But it was too late, I had already spent money on tickets and accommodation. Regardless of my new situation, I was going to be making the trip to Cambodia.

Well, the trip is now over, and I realised that for most all of it, I didn’t worry about what to do next even though I’ve just been rendered jobless.

What made it easy to forget my real world woes?

Meang Chouy and life in Cambodia.

The photo above features my friendly and industrious tuk tuk driver Meang Chouy. He was assigned by the resort to drive us around during our stay. Because we spent 6 days with him, we learnt a lot about him and life in Cambodia.

In Siem Reap, there aren’t any public buses. People travel around either on motorbikes, bicycles, tuk tuks, or cars.

Tuk tuk drivers would charge about USD 3 for a ride from Pub Street back to our resort which is about 3km away. While it might seem a lot of a short 8 minute ride, here’s how the cost of living in Cambodia compares.

USD 1: cost of a 1.5-litre bottle of Vittel mineral water

USD 2-3: cost of a coconut at a restaurant

USD 3: cost of a tuk tuk ride from the city centre (approx. 3km)

USD 4-8: cost of a bowl of Khmer Curry with rice

Granted some of these prices might apply only for tourists and not locals, but it definitely isn’t easy to earn a living as a tuk tuk driver. Every night at Pub Street, there are so many drivers trying hard to make a living, competing with so many others. And yet, our tuk tuk driver Chouy doesn’t harp on it or complain about his lot in life. I only managed to wrangle these facts from him because we were curious and incessantly asked him what was the cost of living like in Siem Reap.

Meang Chouy is 34 years old and is a father of two – a daughter aged 7 and a son aged 2. He lives in the countryside about 30 minutes away from the city centre and earns about USD 12 a day as a tuk tuk driver for the resort. And despite the fact that he doesn’t have a lot of business every day, he makes sure that his daughter gets an education and enrols her in public school. After school, he sends his daughter to a volunteer school that teaches her English for 4 hours. And for that, I really admire and respect him.

In Cambodia, education is free for children from primary school to high school (excludes school materials I believe). To study in college after high school, it would cost approximately USD 400 a year. However, despite the fact that education is (by and large) free, there were many children loitering around the temples at the Angkor Archaeological Park selling postcards and guide books instead of going to school.

I felt so sad every time I see these kids. Sad for these kids who have to work at such a young age. It really puts my life in perspective. I am so lucky and didn’t truly understand how lucky I am until now.

Is this my first time seeing this extent of poverty in a city? No. But because I came to Cambodia worrying about my future and thinking about the luxuries I would have to cutback on and give up now that I don’t have a stable income, the contrast of my problems in comparison to theirs is glaringly stark.

By the end of my adventure in Siem Reap, I felt lighter and things didn’t seem so bleak any more. It’s not all doom and gloom for me. I’m luckier than most really. Spending time with Meang Chouy and seeing what life is like for him and other Cambodians has taught me that even if times are hard and money is sparse, one has to keep being positive, persevere and work with what little one has. It’s all about your attitude really.

So if you’re heading to Siem Reap and need a friendly and hard working driver for your transportation needs around the city, please contact Meang Chouy.