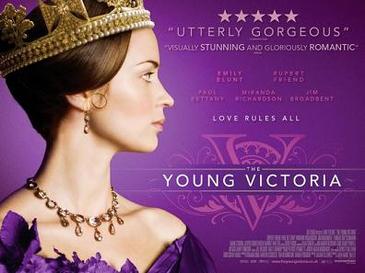 My favourite quote – “You’re the only wife I’ve got or ever will have. You are my whole existence, and I will love you until my last breath.”

2011 was the year of biopics – The Iron Lady, The Lady, The King’s Speech, Soul Surfer, and J. Edgar were all films that hit the big screens in that year. I don’t watch many biopics, but they always fascinate me. And somehow, there always seems to be many biopics on my ‘to-watch’ list. Of those I’ve watched so far, my favourite is The Young Victoria.

The Duke and Duchess of Cambridge visited my sunny little island, Singapore, not too long ago and I thought it would be pretty apt to watch a film that focuses on the British monarchy. Especially since Prince William and his wife are here because of his grandmother’s Diamond Jubilee.

Perhaps it is because of the fact that she is the longest reigning British Sovereign to date that I am so captivated by her story and this film. Or perhaps I really enjoy this film because at the heart of it, it is about a young woman who makes her mark in a man’s world. And to add to that I love a good love story. Considering the time period, the fact that they loved so fiercely touches me greatly.

The film chronicles the life of Queen Victoria from the time she was a young woman, up to the time she becomes a mother. Through the film you get a sense of who she is and why she is the way she is. I am not a historian and will probably not nitpick at the historical facts. So I enjoyed the film immensely.

Do you play chess? I do, but I have to admit I’m not very good at it. Although, I noticed that the scenes in films with chess or archery I tend to enjoy. That aside, I especially liked this scene because I felt that this was the point in the film that Prince Albert and Princess Victoria connected and began to understand each other. I like that Prince Albert talks of a marriage in which both individuals are equal and work towards a common goal.

It’s obvious why I love this other piece of dialogue. Underneath it all I’m a hopeless romantic. But I wonder, while many of us may not ever have a need to jump in front of our loved ones to prevent them from being shot, would you? I have no answer to that question, probably because I’m single and we can say we will sacrifice ourselves for our loved ones, but you can say one thing but doing is something else altogether. Nonetheless, it is very romantic.

Prince Albert: My dear Victoria, while these days may feel endless, please do not lose faith in yourself or your people. We are all allowed to make mistakes, most especially when we have looked to others for guidance.
Queen Victoria: The storm still rages outside the palace walls. I wonder now if everyone was right. Perhaps I am too young and inexperienced for my position.
Prince Albert: Open your mind, examine your choices and your honesty will take you through the storm. I promise that you can do this work and do it well. You have courage and heart, and you said it yourself, you are stronger than you look.

I like this exchange between Queen Victoria and Prince Albert, I like that Prince Albert understands her and knows just how to support and encourage her. The film portrays the budding romance between Queen Victoria and Prince Albert through their letters and while this form of courtship seems slow and dated, do remember this is set in a time when emails and telephones were not invented yet. Perhaps the traditionalist in my likes their love story so much because theirs is a love that grew over time through mutual understanding and support despite the distance. Theirs is a long distance relationship that survived not only the physical distance, but also politics and the fact that his wife is a rich woman and a sovereign.

I must say though I love The Young Victoria also because the cinematography is beautiful. The director loves to use depth of field and plays with the visuals. This gives the film a very romantic feel and gives due credit to the wonderful sets, costumes, and props in the film.

Before The Young Victoria I watched Emily Blunt’s performance in The Devil Wears Prada and I was in awe of her talent. Since that film, I’ve paid closer attention to her and watched her films like Sunshine Cleaning and The Jane Austen Book Club. In fact, when The Young Victoria was first in the cinemas, it was a limited release in Australia and I had to go all the way to the Birch Carroll & Coyle cinema in Bulimba. And mind you I didn’t own a car when I was studying in Australia. She does a fantastic job here as Princess Victoria.

Truth be told, when I saw Rupert Friend’s performance in The Young Victoria, I was rather impressed. And then I went home and researched who he was and what other films he’s acted in before. And I was surprised that I didn’t remember him as Wickham in Pride And Prejudice. I think it was the accent and the make up that he has as Prince Albert in the film. Nonetheless it is his performance as Prince Albert in The Young Victoria that made me sit up and notice him.

Paul Bettany. Ever since the film Wimbledon, I have paid close attention to his performances. He has this subtle charm that sneaks up on you and he didn’t disappoint in The Young Victoria. In fact, the entire film was well cast.

The Young Victoria is a film that is most definitely worth watching.

The Young Victoria is beautifully shot, wonderfully cast, and invites you to get a glimpse of the fascinating woman who is also the longest reigning British Sovereign to date. It reminds me that royalty or not, they can make mistakes and they can fall in love. They are human, just like you and me. (4.9 of 5)